I printed a small toy with rotating wheels and was intrigued when I found it is possible to print something all in one go and for the wheels to be able to move. I didn’t need any wheels, and I didn’t want to use anyone else’s designs for wheels, so I experimented just to find out how it is done.

My first problem was that the bottom of the top wheel in this photo is an unsupported surface. 3D printers cannot print in mid air. They need something to fix to. The axle only supports the centre of the wheel. The rest needs to be sitting on a cone  which slopes gently outwards from the axle. 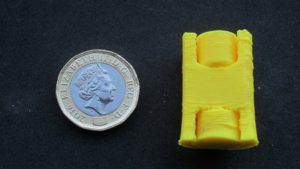 The casing for the wheel has to fit round the cone but leave a gap so the wheels can turn. The gap makes a funnel shape. A similar shape, in reverse, is needed for the other wheel. The cones and funnels are at the same angle. The angle and spaces have to be arranged so that the printer can print without filling the gaps. 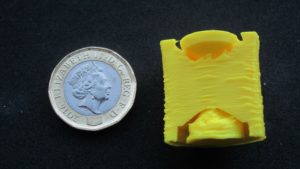 The first one was too small. The pieces fused together and I couldn’t see exactly where they were fused.

I made changes to the angle and spacing then printed it at a bigger size. It was still wrong but I could begin to see where it was starting to fuse together. 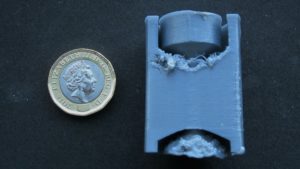 More work on the angles and spacing. I printed an even bigger model and the wheels do turn. It works but doesn’t look good. 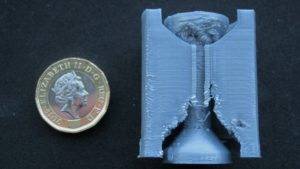 I made more small alterations and it’s definitely getting better. I decided to stop at this point.

I moved on to thinking about wheels that were not encased and would rotate just by rolling on their own axles. 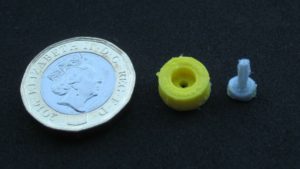 I designed a wheel and an axle that should fit inside it. The axle wouldn’t fit. 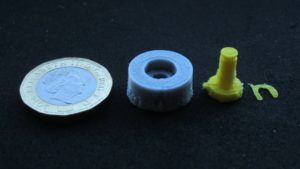 Version 2: Bigger wheel  and axle. The holes in the wheel were also bigger, in comparison, to the axle. I also put a groove round the end of the axle and made a clip to fit in that groove to hold the axle in place in a model. 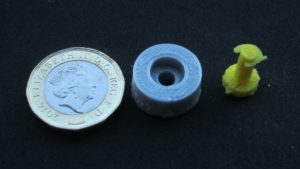 Version 2: The pieces need cleaning but it is obvious that the axle still won’t fit in the wheel. 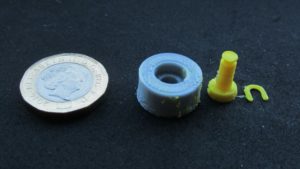 Version 3: I made the holes in the wheel even bigger and made a sturdier clip. 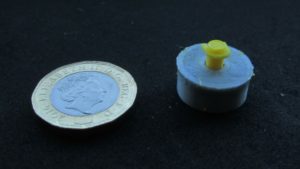 Version 3: Once the axle would fit inside it became obvious that it was too short. 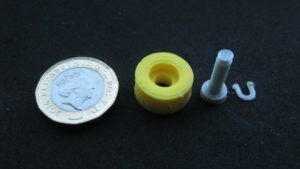 Version 4: A more robust clip, a longer axle and very slightly bigger holes in the wheel. 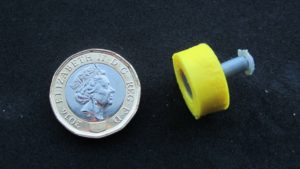