A friend recently posted a photo of his new garden fence. It prompted me to find some photos of our geometric fence.

The house has this very small garden at the front and no garden at the back. When we moved in, over twenty years ago, there was a very old, rusted, fence sitting on the stone wall that you can still see. It was held in place by a tree that had obviously been growing between its bars for many years. It needed replacing but wasn’t really dangerous – unlike the back of the house.

As you can probably tell, the front door is one floor up from the back door and the building fills the entire site. The original plans, from 1890, show that the area at the back was originally a walled yard with buildings for coals, ashes and W.C. In the 1970s the garage was built, a window was replaced by patio doors and it became possible to walk out of the back of the house onto the garage roof. Unfortunately, it seems this was not done in accordance with building regulations so it was also possible to walk straight over the edge.

One of the first things we did when we moved in was to make the garage roof structurally sound, cover it with decking and add a fence. We wanted the fence to use one of our favourite geometric designs so commissioned Varcrofts Wrought Iron, in Burnley, to do it. We originally thought that we would use the same square design all round but soon discovered that building regulations say:

Any structure that has a fall or drop over 60mm needs to be protected by a railing that is at least 1100mm high. The bars of the railing and the bottom rail should be no more than 99mm apart; an object of 100mm diameter should not be able to pass through.

The cost to make hundreds of small motifs would have been exorbitant so we settled on having just a few between plain upright bars.

Popular belief is that the 100 mm rule is to prevent a child from getting their head stuck in a fence. This doesn’t seem to make sense when you consider that the fence at the front of the house is just at the level where a child could reach, and get stuck.

The design is the same but the scale is different. It was adjusted to fit the space available.

Some years ago our next door neighbour took a photo of the garage roof, from his upstairs window, because we had washed some afghans and laid them out to dry.

These photographs have been taken at different times over the years, often in the rain. We get more than our fair share of rain in this part of Lancashire! This is a fairly recent one. The garden changes but the fence doesn’t.

But why did we use this design?
This has long been one of our favourite designs. It is very pleasing to a knitter and to a mathematician and it is easy to create in wrought iron because it can be made entirely from straight lines.

The Mathematics
One of the nicest properties of this design is that each new set of triangles is the same area as everything that has gone before. The overall area is doubled each time.

Two squares side by side double the area.

The ‘diamond’ shape is also twice the area of the starting square. You can see this if you imagine folding the four triangles inwards. They exactly cover the centre square.

Four squares together have the same area as the next iteration.

There are also nice relationships between the lengths of the sides. Pythagoras Theorem says that the square on the hypotenuse of a right triangle is equal to the sum of the squares on the other two sides.
The hypotenuse (the longest side) is referred to as h.

This design is also very useful for investigating how triangular numbers and square numbers are related.

The Knitting
This design is nice to use because the calculations are so simple. Knitters don’t even need to know Pythagoras Theorem to make it work. The accurate calculations refer to the square root of 2 but all you really need to know is that it is roughly the same as 1.4. Knitting is forgiving so a slight inaccuracy won’t matter.

The start of each new shape is 1.4 times the previous one. If you know the number of stitches on the diagonal of the very first square you can use a calculator to find out how many stitches to pick up along a side of the square to make it stay flat. The diagonal is 1.4 times the length of the side so you need to divide by 1.4 to find the number of stitches.

Example: If the centre square has 20 stitches, divide by 1.4 and you get the answer 14. Pick up 14 stitches along the edge of the square and knit the triangle. Do the same on all four sides.

Once you have done the first calculation all you need to do is to keep doubling the number of stitches.

You will never have to worry about whether you have enough yarn to finish the next set of triangles. Because the area doubles every time, you just need to weigh what you have done so far. You will need the same amount again.

One lovely thing about making these triangles is that you are always decreasing. Each row has one less stitch than the row before so you always feel as though you are making good progress. You get led into that situation where it is ‘just a few more rows’ until a triangle is finished and you can move on to the next.

Using the design
Because the design relies on doubling the numbers of stitches, different squares automatically fit together. Use them in any combination you like.

We use grayscale diagrams so you can think about what happens when you add your own colours.

If you want your finished item to be a particular size, start by calculating the size you need for the very smallest square. Everything else should then follow on automatically.

Here are some designs using From Square To Eternity 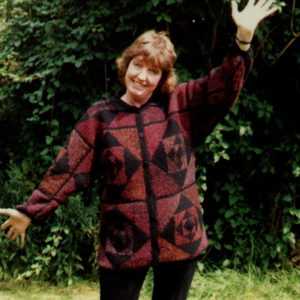 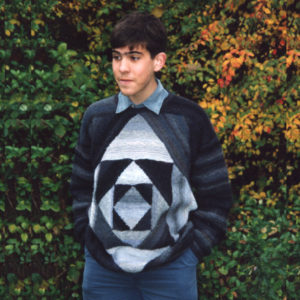 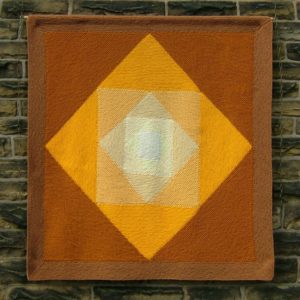 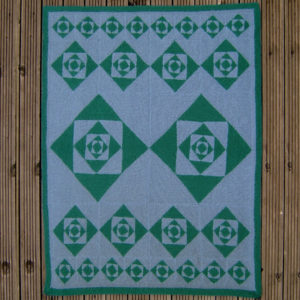 It was only when I started writing this that I realised, after twenty years of living here, that, unless you live in a town like ours, it is quite unusual to have a house with roads on three sides. We have a ‘back street’. (Think Coronation Street but smarter.) These streets have no names but they are proper, cobbled roads, with footpaths, and wide enough for two vehicles. The wall on the right is the end of our garage. This is where anyone could have fallen to the ground.