Toilet rolls have been at the front of my mind this week. That’s not something you hear often.

Every week Museum Crush email digest pops into my inbox. It says of itself The Museum Crush digest brings incredible objects from the wonderful world of museums to your inbox every week. It does indeed contain some fascinating links. This week my attention was caught by a link to an article about an 83 year-old toilet roll The old toilet roll that helps tell the story of Letchworth Garden City. It is an interesting read but even more fun is a link in the article to How Brits went soft on toilet paper on the Wellcome Collection website. It tells you all you never knew you wanted to know about how modern toilet rolls came about.

My other event with toilet rolls started a few weeks ago. I got an email from a man who had come across photos of toilet roll covers, on our website. He was desperate to buy one for his wife’s ‘big birthday’. He didn’t seem to know why she wanted a knitted toilet roll cover. He thought it might be a childhood memory thing.

We don’t usually sell anything we have made, unless it is to museums and galleries. My first reaction was to say no. Then I stopped to think and decided they had been sitting on our shelves, collecting dust, for long enough, so I said he could have whichever he wanted (with a few exceptions), for a donation to Kidney Research UK. He chose two. This was Wednesday and he needed them by Saturday so asked for them to be posted with guaranteed 24-hour delivery, which was very expensive but he was prepared to pay. I had to tell him they might be dusty but there was no time to wash them so I gave them a quick once over with baby wipes.

They were posted, got there in time, the postage was paid and his wife was thrilled. He sent a message to say they arrived and that he would send a photo, and make a donation, later. I haven’t seen a photo but this week he made a very substantial donation to my my fund-raising page.

Toilet roll covers are a far cry from the kind of knitting we put our hearts into and yet they seem to keep popping up. I decided to go back and try to work out how we seem to have made so many of them.

The very first are a dim and distant memory, well over 20 years ago. They were in response to a discussion on one of the original online knitting groups – probably the KnitList. I remember using red chenille to make a crown, with gold trimmings and jewels. There were some towers and some geometric designs. I don’t know why we made them but I do remember a conversation with the organisers of the Knitting and Stitching Show who had a tea cosy competition that year and said they had wished they had thought of toilet roll covers instead because they were hoping for really eccentric creations.

In about 2006 I had the mad idea of combining our love of puns and word play with some crazy designs. We started to think of names for covers that would contain the words paper, roll, tissue, etc. We soon had about 50 ideas and made many of them. These are some of the first:

Steve’s idea for making Paper Boy (who goes by the name of Roland) sent the covers in a different direction and spawned rows of little people. These are some of them:

We became inundated with toilet roll covers and eventually approached GMC Publications to publish them in a book. They jumped at the idea and decided to publish a whole series of ‘Cozy’ books. The publishing was fairly chaotic. They had all the covers, we were in Australia and NZ for six weeks but they had ‘forgotten’ to give us a contract or ask for any text even when they had taken all the photos. The main part of our document was back at home but we managed to get there with a whole series of disjointed notes. It was published in 2007. The only disappointment was that they changed most of the names so the puns that held all the ideas together had disappeared. These are the covers from the book with our original titles, not those in the book:

We don’t often accept commissions but sometimes they are just too much fun to resist. In 2007 we were asked by Sky Sports to make two football characters for prizes in a competition. They were Ruud Gullit and Ron Atkinson. It is difficult to make toilet roll covers look like real people but these two were comparatively easy because Ruud had very distinctive hair, and his name and number on his shirt. Ron wore dark glasses, a sheepskin coat and frequently had a cigar in his hand. They took a ridiculously long time to make. This was partly because both had layers of clothes. We also had to find suitable yarns and work out how to make glasses. (It would be easy now as we have recently 3D printed glasses for puppets.) Unfortunately Ron had a falling out with the organisers before the event so his cover was never used and went home with one of the researchers. 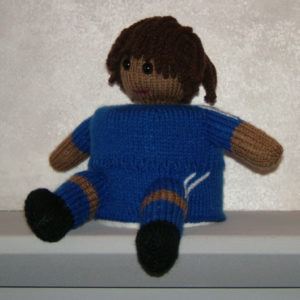 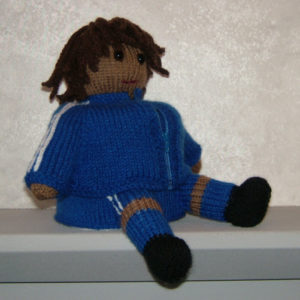 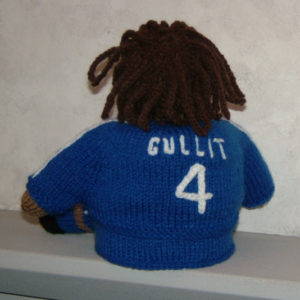 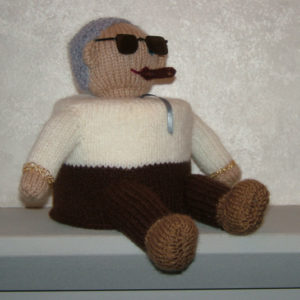 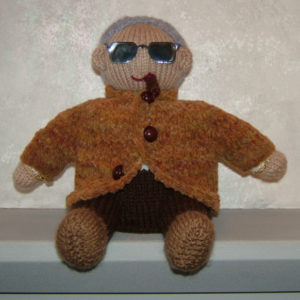 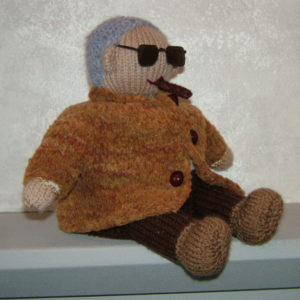 Then we were asked to make a cover for the Paul O’Grady Show. This was much more challenging as there was nothing in his appearance that really made him stand out. We almost turned it down but then realised that he did have a very distinctive dog! 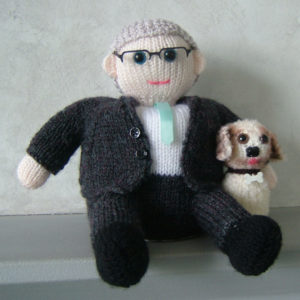 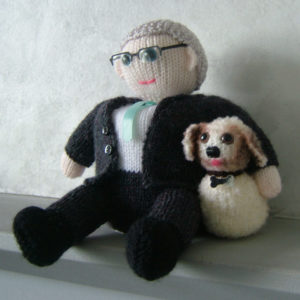 Another fun one was the national flag of Lovely. I have written about this at length elsewhere so click here if you want to read the whole story. It was related to a television programme, with Danny Wallace, called How to start your own country. The citizens of the country were encouraged to print out their own flags and display them. I put mine on a toilet roll which was then requested by the production company and displayed in the programme. The entire series ended with a shot of the toilet roll, on the toilet, in our bathroom. 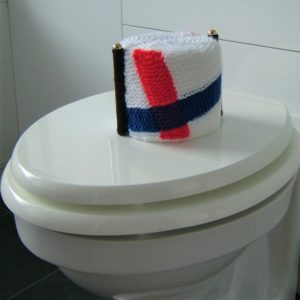 For some reason these things keep rolling back into our lives. In 2014, for some reason I don’t remember, maths and toilet rolls collided and we made a series of covers based on mathematical concepts.

… and now this account has turned full circle. It was two of the mathematical covers that the man bought for his wife.

I surprised myself when I collected together all these pictures. I hadn’t realised there were so many – and there are a few more I haven’t included. These are the two most recent people:

Many patterns are available on Ravelry

One last thought: There is very little difference between a hat, a tea cosy and a toilet roll cover. This was something a publisher was once thinking of following up but it came to nothing because (a) it would have been boring to make the same thing three times over and (b) the publisher was likely to sell more if they were in three separate books.