Illusion knitting seems like magic. Things appear and disappear. A Kind of Magic is also the name of the chorus who became National Mixed Chorus Champions 2019 at the British Association of Barbershop Singers Convention. The chorus was an amalgamation of The Cottontown Chorus and Amersham A Cappella. Steve designed a wall-hanging to commemorate this fantastic win.

The video shows how the image in illusion knitting changes as your view changes. Watch the video with your sound turned on as the soundtrack is of the same two choruses singing in eight-part harmony at a rehearsal of It’s a Kind of Magic.

Both choruses are multi-medal winners in their own right. A couple of years ago they sang two songs together in eight-part harmony. For such talented groups that was comparatively easy because they were able to learn the two halves separately with one combined rehearsal at the last minute. The two songs were The Climb and It’s a Kind of Magic.

Their competition pieces were much more difficult. The rules for competition Barbershop are quite strict. Only four parts are allowed. Generally speaking this means that many of the men have to sing lower parts than they usually do and many of the women have to move upwards. It was quite challenging and made even more so because the two groups are 200 miles apart and they only had one real-life rehearsal. (For more info, and to watch the two competition songs, go to this previous post.)

In the bar, in the evening after the win, one of the Amersham ladies said, ‘Are you the person who was knitting at the rehearsal?’ It suddenly seemed a good idea to make something specially for the chorus so, as soon as we got home, Steve set about designing a shawl/wall-hanging, incorporating the Amersham logo and the words A Kind of Magic.

Finding the right yarn was tricky. We wanted purple and white (because these are Amersham’s colours) – with sparkles. We went on a journey and managed to find Woolcraft Diamonds. Amazingly, today, we went into our local branch of Poundstretcher and they had some yarn. There must have been less than 100 balls in total. Two were white and sparkly, two were purple and sparkly! (For those who don’t know, Poundstretcher is a cheap British store that sells a very odd mixture of things.) 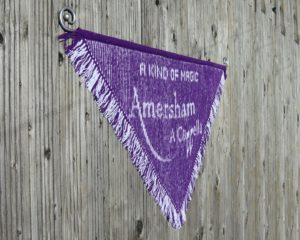 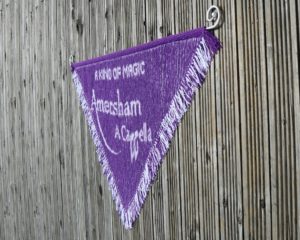 Small block letters are quite easy to do in illusion knitting. Fancy writing is more tricky. It has to be big to be able to show the small details of the font. There was just enough room to fit the lettering onto a shawl. Although it can be worn as a shawl, it is much more impressive when it is seen flat. When someone wears the shawl you only see flashes of some of the lettering. It has a channel at the top so it can be hung on a pole. 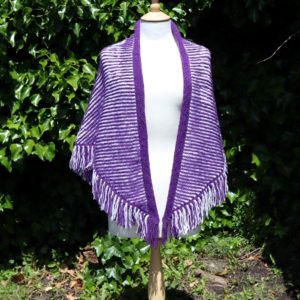 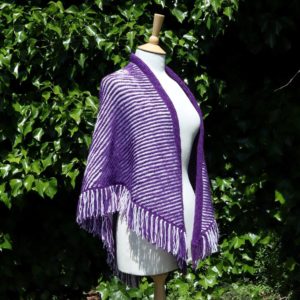 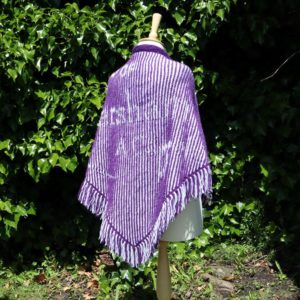 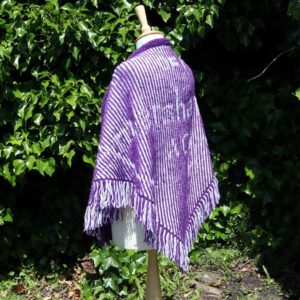 We do not often add a fringe to a shawl but it seemed a nice finishing touch this time. There are as many pieces of fringe as there are stripes. The strands line up with the stripes.

Whenever Amersham go on stage in a competition they take a Barbie doll dressed to match their stage costume. I don’t usually make doll clothes but thought it was only right that Barbie should have a shawl. She looked a bit strange with just a shawl so she also got a dress, hat and boots.

Barbie is too small to show any kind of illusion but the dress and shawl use illusion techniques to make the purple appear more prominent in the shawl and the white more noticeable in the dress. 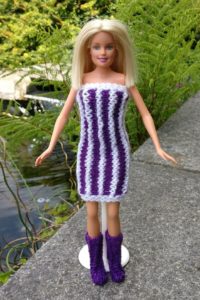 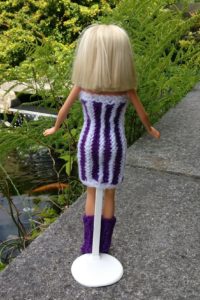 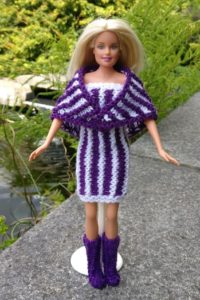 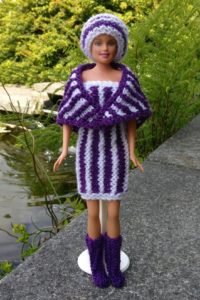 Barbie wouldn’t stand up to have her photograph taken. Steve downloaded a file from Thingiverse to 3D print a stand for her. It had a support that went round her waist so it spoiled the effect of the stripes in her dress. He used the base of the original stand with a shorter piece for her to lean against.

The pattern for the Amersham shawl will be of little interest to anyone other than Amersham members but it is available for anyone to download from Ravelry.
The Barbie pattern is also available as a free download.